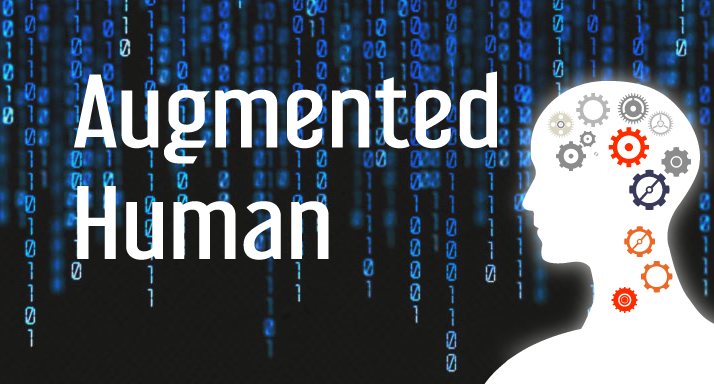 Throughout humanity’s history, people have been exploring approaches to stretch the biological limitations of the human body. We have been creating the means and devices to augment our physical beings to overcome our genetic and environmental weaknesses from the beginning such as wearing shoes, using eyeglasses for better vision, prosthetic limbs, artificial organs and even more physical power through the performance-enhancing drugs to name a few. 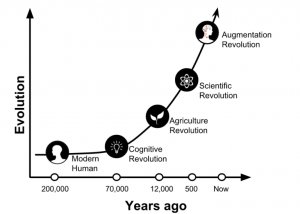 “Three important revolutions have shaped the course of the history of mankind,” Yuval Noah Harari writes in his book Sapiens: A Brief History of Humankind

. If you have not read this book yet, I highly recommend it. The cognitive revolution kick-started history about 70,000 years ago. The agricultural revolution sped it up about 12,000 years ago and the scientific revolution, which got underway about 500 years ago. And, I believe, a new revolution has just begun. Augmentation Revolution.

In the Augmentation Revolution, the aim is to develop technologies and techniques for overcoming current limitations of human cognitive and physical abilities. No one knows where this revolution will end, but by the end of next decade, I believe that every individual on earth will be using one or more augmented capabilities in their daily lives. We’ll be relying more and more on these enhanced abilities. Our actions will depend upon our “level of augmentation.” We will no longer be able to distinguish between the natural and the augmented.

Superhuman, supernatural, or paranormal abilities have always fascinated us. Religion, History, Guinness books, Comic books list many of such powers. We admire Zeus’s power to hurl his thunderbolts or Sanjaya ability to see events at a distance about 50 miles to share the war details live to blind King Dhritarashtra in Mahabharata. We love to talk about Hanuman flying in the sky to cross the sea between India and Lanka, or Jesus suggesting to throw the net on the right side of the boat to find some more fish. It is no accident that superman, batman or iron man in cinemas draw huge crowds. We find comfort and hope in our superheroes.

And, in last few decades, we all got additional powers with the invention of computers, mobile devices, internet, Wi-Fi, and cellular technologies. We all got access to vast knowledge instantly with a brain extension called Google, an ability to instantly connect nearby or far with mobile phones, and much more capabilities. 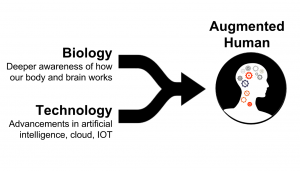 And, now, breakthroughs in Artificial Intelligence (AI) and Machine Learning (ML), internet of things (IOT), Cloud, nanotechnologies, sensing technologies, genetic engineering, pharmacology, bioengineering combined with our understanding of how brain and body function are creating paths for this augmentation revolution. The augmented human will be smarter, happier, healthier, stronger and efficient. And, for the first phase of this revolution, you don’t need to have a chip implanted in your body or brain, or involve any biological tricks or chemicals. Just the IOT, AI, ML, and cloud is enough.

For example, specialized sensory receptors areatplay when we see colors, hear sounds, feel textures, smell flowers or taste sugar. There is no specific receptor for the time, and yet we are consciously aware of the passage of time. Although invisible and ephemeral, time is an essential variable in the perception of user experience. All the more so in the digital era. People are looking for network performance aligned with their needs, abilities, and expectations, at that moment, on that device. Every minute of network slowness is magnified when you are doing something time critical. As simple and measurable the concept of slowness might seem – we construct the experience of time in our minds. Perceived time is not isomorphic to physical time. And, this is where there is an opportunity to augment using IOT.

Our brainwaves are “signatures” of what is happening inside the brain i.e. how we are feeling. For example, the brainwaves are different when we are relaxed vs. when we are time-pressed. IOT sensors can be developed to capture these brainwaves. External IOT sensors (passive antenna with high impedance at least 10e12 Ohms can be integrated into Wi-Fi access points) or neural electrodes (that can be embedded in wearables such as in-ear, outer ear, or eyeglasses arms) can be used to capture the brainwaves. Once the brainwaves are captured, those can be analyzed in the cloud to fine tune the network availability and performance not just based on some “metrics” such as “Wi-Fi statistics” but as per user’s psychological needs. I will share more details on how brainwaves can be used to fine tune Wi-Fi waves i.e. how Wi-Fi performance can be aligned with the expectations at the user’s psychological level in another article. In this example, I am focusing on Wi-Fi, but once the brainwaves have been captured, the possibilities are endless!

Although we are talking about using artificial intelligence, cloud, IOT, Augmented Human is not to be confused with all the work that is going on in AI and Robotics. It is at the other end of the spectrum. Augmented Human is about making use of the technology to transform the way we live, interact and perform UNLIKE the use of technology to make robots and computers to be able to think and act like humans. Augmented Human is what I believe is the next evolutionary step for humankind. In fact, the fear that computers and robots will take over our jobs and our lives is NOT real. Because, in reality,we will evolve into a much more advanced and augmented human being. The technology, AI, and robotics will support everything we do at a whole new level. Only ask, I have to you is please don’t remain native – adapt to the augmentation. I am sure you have heard ‘It is not the most intellectual of the species that survives; it is not the strongest that survives, but the species that survives is the one that is able to adapt to and to adjust best to the changing environment in which it finds itself’. Not sure if Charles Darwin said these words as is, but I agree. 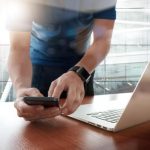 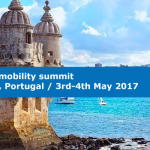 WI-FI: WHERE WE GO WHEN WE LEAVE THE NOW!